Land and Climate of Ukraine

The territory of Ukraine is equal to 603,7 th sq km or 5,7% of European territory. It occupies the territory of Southern West part of East-European Plain, part of the Carpathians and the Crimean Mountains. The territory from North to South is 893 km, from West to East - 1316 km. Ukraine lies within moderate latitudes and has ports on the Black sea and the Azov sea. Geoposition between Eastern and Western peoples and cultures made a great impact on the history and now-a-day development of Ukraine. Ukraine has inland and marine borders of 7590 km.

Natural scenery of Ukraine is picturesque. Recreational landscapes occupy an area of 9.4 mln hectares (one hectare is about 2.5 acres). Forests cover about 14% of Ukraine’s territory. The longest mountain range in Ukraine is the Carpathians stretching for 270 km; the highest mountain is the Hoverla (2061 m). The Crimean Mountains are situated in the southern part of the Crimea, the southernmost extension of Ukraine (the highest mountain is 1545 m). Over 70,000 rivers flow through Ukraine. The major rivers are the Dnieper (in Ukrainian - "Dnipro") (third longest in Europe), the Dniester, Southern Buh, Siverskiy Donets, Prut, the mouth of the Danube is situated in Ukraine. There are over 3000 natural lakes and about 22,000 artificial water reservoirs in Ukraine, as well as many sources of mineral water and medicinal mud which are used to treat many diseases.


East Carpathians Biosphere Reserve is the largest biosphere reserve in Europe. The reserve covers 200,000 hectares
(in Poland 53%, in Ukraine 27% and in Slovakia 19% of the total area).

A network of 10 nature and biosphere reserves (including The Primeval Beech Forests of the Carpathians and Askania-Nova) and more than 100 wildlife refuges has been established to protect wildlife, especially beaver, lynx, elk, and muskrats. Birds include the Eurasian black vulture, steppe eagle, and gray heron. Ukraine has more than 200 species of fish, including pike, carp, and sturgeon. There are 25 species of domesticated animals, including cattle, hogs, sheep, and goats.

Ukraine is blessed with rich farming and forestry resources.

Agricultural land in Ukraine is owned by individuals, and leased to agricultural companies on a three- or five-year basis.

Fast fact: Ukraine has 1/4 of all stocks of black soil (or chernozem) on the planet. Black soil with proper handling gives the greatest number of crops and considers as the best land for agriculture.

Ukraine has relatively limited area of forests and lacks its own forest resources. Forests cover 9.4 mln ha of lands. The total volume of timber comes to 1.74 billion m3. The highest concentration of forests is in north and west Ukraine (predominately pine, beech, oak and spruce). Timber presently is the forth important natural resource in Ukraine following oil, gas and coal. The forests play a considerable role in soil and water conservation, as well as areas for recreation.

Most part of Ukrainian forests - sixty five percent - use for environmental and public purposes. While occupying less than 6% of the area of Europe, Ukraine holds approximately 35% of its biological diversity due to location at the junction of various natural zones and covering of the crossing of animals' and plants' migration paths. Ukraine contains four natural zones: broad leaves woodlands, forest-steppe, steppe, and Mediterranean Natural landscapes are represented on nearly 40% of the territory of Ukraine. The least transformed natural landscapes can be found mainly under forests. Near 44% of forests performs protective and conservative functions.

Forests in Ukraine are in the State ownership, 66% of forest fund are managed by the State Committee of Forest Management, 26 - by Ministry of Agricultural Policy, and 2% - by Ministry of Defense. Another part of forests fund are managed by 50 other Ministries and agencies. Private forests amount less then 1% of forest fund. According to Land Code, ratified by Parliament in autumn, 2002, the forest plots with area up to 5 ha can become private, as well as private forests can be planted on lands with low productivity.

The ongoing production of raw materials from forest resources creates a global market demand for certified wooden products and timber from the Ukraine. The leading countries importing these goods are Turkey, Poland, Bulgaria, Austria, Germany, the Slovak Republic and Romania.

The climate in Ukraine is similar to the wheat-producing regions of Canada and is characterized by abundant precipitation and cloudy skies, especially in fall and winter. The mean temperature in summer is 67°F (19°C) and in winter 21°F (-6°C). Although summers tend to be short, the temperature can rise to the 90°F (30°C) making it uncomfortable, since most buildings have no central cooling systems. Winters are long and cold, with cloudy skies as a norm.

Only a narrow coastal strip of the Southern coast of Crimea is characterized by sub-tropical (Mediterranean) climate. 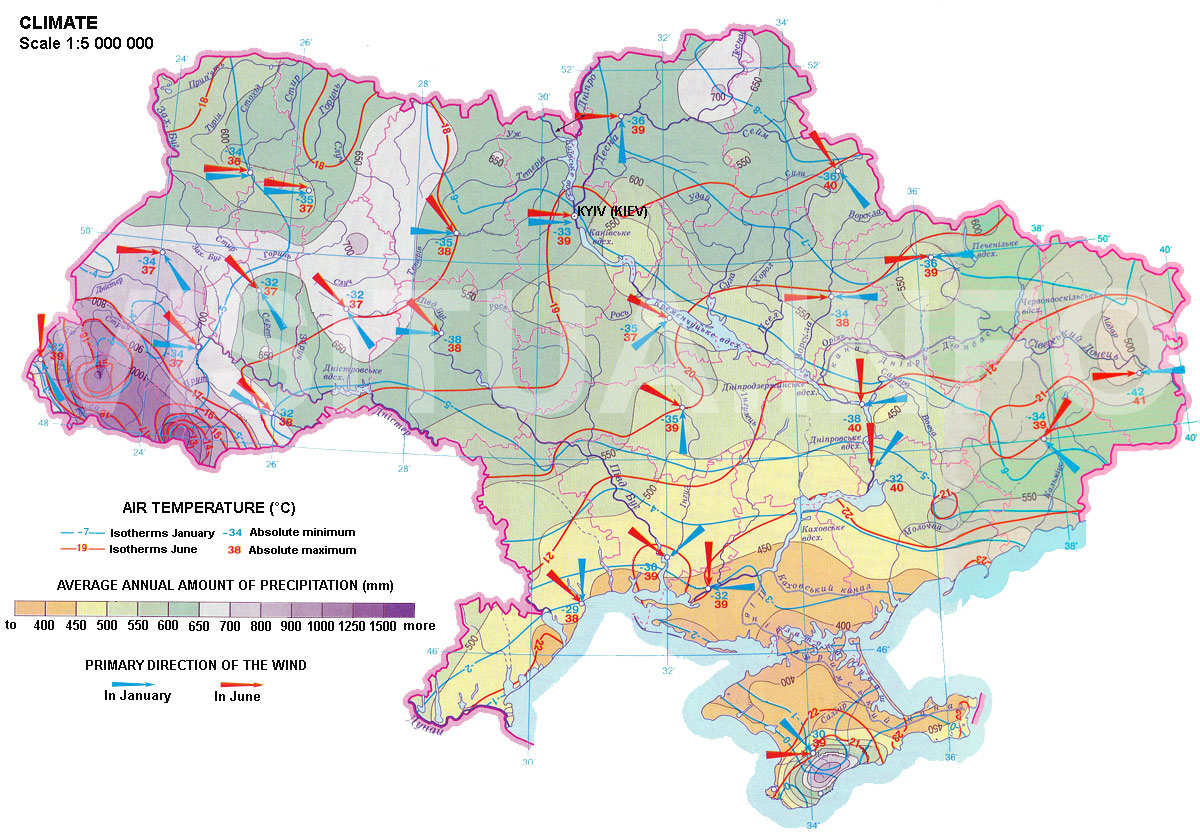 The climate in Ukraine largely changes in line with the global pace. At this point, Ukraine is not among the countries most vulnerable to the global dynamics of climate change, reports the UN international group of experts. However, a permanent rise in the average annual temperature may result in dramatic transformations in a vast part of Ukraine’s physical and climatic landscape. The Carpathian, Southern and South-Eastern regions of Ukraine will be the most vulnerable. A rise in humidity resulting in flooding is projected for the Carpathian area, while Southern and South-Eastern Ukraine may experience lengthy droughts and desertification of vast territories.

Ukrainian researchers believe that the country’s climate has already become less continental and is growing more similar to a maritime climate in some areas. These transformations have triggered a shift of climate zones that are slowly moving northward and are changing the natural system as they destroy natural ecosystems. The forest-steppe parts of Ukraine are no longer considered to be evenly humidified areas.

Currently, Ukrainian agriculture is not responding to climate change properly.