Ukraine obtained a market economy status from both the USA and the EU and has also joined the World Trade Organization (WTO). Foreign direct investment (FDI) has continued to flow in, although in a relatively low volume.

On 27 June 2014, the EU-Ukraine Association Agreement was signed by European Union Heads of State and Government and Ukrainian President Petro Poroshenko in Brussels. The key parts focus on support to core reforms, economic recovery and growth, and governance and sector cooperation in areas such as energy, transport and environment protection, industrial cooperation, social development and protection, equal rights, consumer protection, education, youth, and cultural cooperation. Also it includes a Deep and Comprehensive Free Trade Area with EU – this will go further than classic free trade areas, as it will both open up markets but also address competitiveness issues and the steps needed to meet EU standards and trade on EU markets.

The Composition of the National Anthem of Ukraine dates back to the year of 1862, when young folklorist and ethnographer Pavlo Platonovich Chyubynsky wrote the poem “Ukraine is still alive”. The popular poem was noticed by religious leaders of those times. One of them, Father Mykhailo (Verbytsky), known to be a talented composer, wrote music to the poem (1865).

Ukraine is a unitary republic, not a federal state. The country is divided administratively into 24 provinces called "oblasti"; two cities — Kiev and Sevastopol — carry the same status as an oblast. The Crimea is an autonomous republic within Ukraine. There are 447 towns and 28,800 villages in Ukraine.

The largest cities in Ukraine (all have a population of over one million) are:

Kiev (in Ukrainian - "Kyiv"), the biggest city in Ukraine, capital of Ukraine and economic, cultural, and educational center, has a population of 2.9 mln;
Kharkov (in Ukrainian -"Kharkiv"), noted for its engineering expertise, machinery plants, and educational institutions;
Dnipro (ex. Dnepropetrovsk), a center of metallurgical and aerospace industries;
Donetsk (see The Russian Invasion of Ukraine), known for mining and metallurgy;
Odessa (in Ukrainian - "Odesa"), on the Black Sea coast, is the country's largest seaport.
Lviv (Lvov in Russian) is a city in Western Ukraine, the administrative center of the Lviv region, a cultural, educational, scientific, and tourist center of the country, a major industrial center and a transport hub.

Ukraine has a parliamentary presidential system, which means that the country elects on national level a head of state, the president, and a legislature. The president is elected for a five-year term directly by the people. The president needs a majority of the votes in the first round to be elected. Otherwise a second round is held, in which only the two candidates with the highest amount of votes (in the first round) can compete.

President is due to prevent any actions of the legislative, executive and judicial branches of power that directly or indirectly infringe the Constitution of Ukraine. With the aim of fulfilling this duty the President is vested with corresponding authorities. He is empowered to suspend decisions of government bodies and veto laws passed by the Verkhovna Rada (the Supreme Council of Ukraine).

The Cabinet of Ministers of Ukraine provides for carrying out financial, price, investment and taxation policies, as well as actions in the spheres of labor and employment of population, social protection, education, science and culture, environment protection, ecological security and nature management.

The Cabinet of Ministers works out the draft of the Law on the State Budget of Ukraine for approval by the Verkhovna Rada, and ensures its execution.

The Supreme Council (Verkhovna Rada) initiates legislation, ratifies international agreements, and approves the budget. The unicameral legislature consists of the 450-seat Supreme Council, whose members (People's Deputies of Ukraine) are elected to serve five-year terms. All parties that win at least 5% of the national vote in the parliamentary election are awarded seats on a proportional basis.

The Supreme Court is the highest judiciary body. Courts are the only bodies to provide justice in Ukraine. The system of courts is based on the territorial and specification principles.

1. The geographical centre of Europe is situated in the territory of Ukraine, not far from the city of Rakhiv in Zakarpattia region.

2. The grave of the founding rabbi of Hassidism, situated near Uman', is a pilgrimage site for Hasidic Jews.

3. The first state constitution in Europe was created by a Ukrainian politician Pylyp Orlyk. On April 5th, 1710 he was elected the Hetman of Zaporozhye troops. On the same day Pylyp Orlyk has announced "the Constitution of the rights and freedoms of Zaporizhye army". For example, U.S. Constitution was adopted in 1787 and French and Polish in 1791.

4. The first computer in continental Europe was built in Kiev under the supervision of the scholar Sergey Lebedev and well-known scientist Victor Glushkov in 1950. 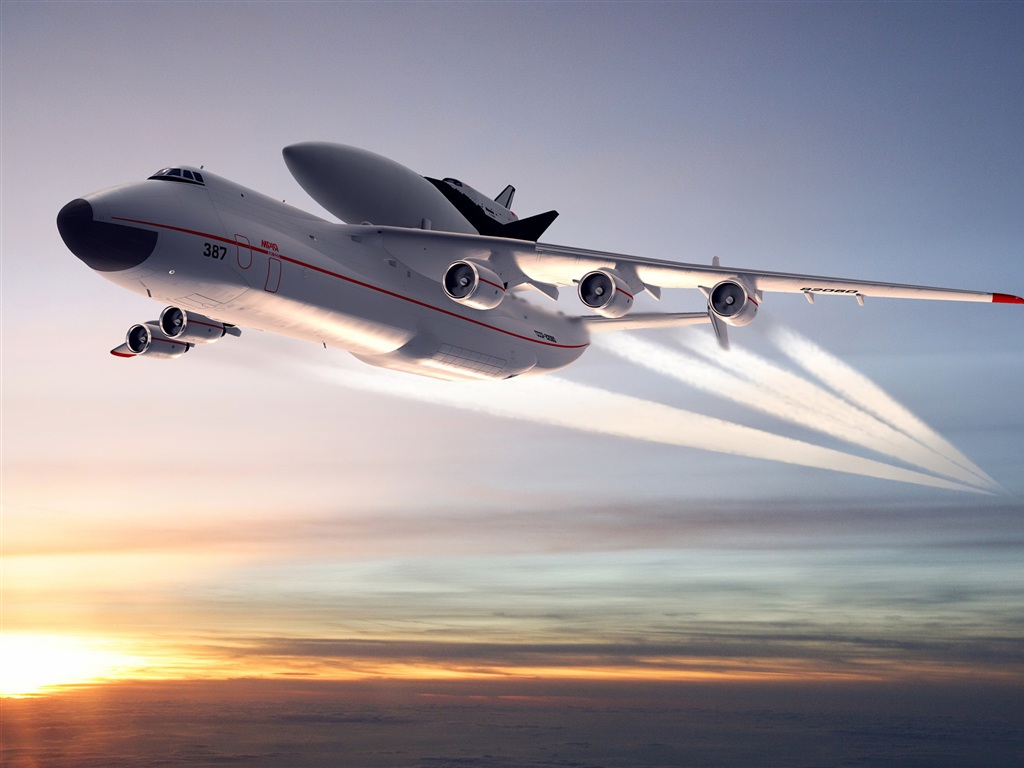 Ukrainian AN-225 Mria as the basis for the aerospace systems.

5. AN-225 “Mria” (from Ukrainian – “a dream”) is today the biggest and the heaviest aircraft with the highest cargo capacity in the World. This unique cargo plane was constructed in the 1980′s by the Antonov’s Development Laboratory (Kiev, Ukraine). Its length is 84 m, height – 18 m, total cargo capacity – 250 tons.

6. Ukraine contains around 5% of the worlds mineral resources.

7. More than 12 million foreign tourists visit Ukraine each year, to see the Carpathian Mountains, the coastline of the Black Sea, the Dnieper River, vineyards, ruins of ancient cities and castles; ancient churches, cathedrals, and monasteries; world-class opera and ballet, and more.

8. Ukraine has the World’s 5th largest and fastest growing IT outsourcing services market in the World, with revenues in 2011 expected to reach $1 billion.

10. The horse was first domesticated on the territory of Ukraine.

The Russian Invasion of Ukraine

President Yanukovich's backtracking on a trade and cooperation agreement with the EU in November 2013 - in favor of closer economic ties with Russia - led to a three-month protest occupation of Kiev's central square. The government's eventual use of force to break up the protest camp in February 2014 led to all out pitched battles, scores of deaths, international condemnation, and the president's abrupt departure to Russia. An interim government scheduled new presidential elections for 25 May 2014. On 1 March 2014, one week after the overthrow in Kiev, Russian President Putin ordered the invasion of Ukraine's Crimean Peninsula claiming the action was to protect ethnic Russians living there. On 16 March 2014, a "referendum" was held regarding the integration of Crimea into the Russian Federation. The "referendum" was condemned as illegitimate by the Ukrainian Government, the EU, the US, and the UN General Assembly. Russian forces now occupy Crimea and Russian authorities claim it as Russian territory. The Ukrainian Government asserts that Crimea remains part of Ukraine.

During the Crimean crisis, demonstrations by pro-Russian and anti-government groups took place in the Donetsk and Luhansk oblasts of Ukraine, together commonly called the "Donbass". These demonstrations, which were part of a wider group of concurrent pro-Russian protests across southern and eastern Ukraine, escalated into an armed conflict between the Russian paid separatist forces of the self-declared Donetsk and Lugansk People's Republics (DPR and LPR respectively) and the Ukrainian government. As this armed insurgency spread across the Donbass, Malaysia Airlines Flight 17 was shot down by pro-Russian separatists using a Buk system (which was moving from Russia in few days before the MH17 crash) over the conflict zone on 17 July near Torez in Donetsk Oblast (Eastern Ukraine). 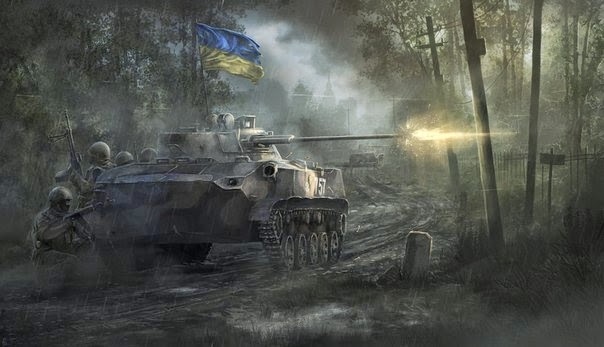 The Ukrainian troops and volunteers defend Ukraine from Russian occupants.

In August, unmarked troops and military vehicles from Russia also crossed into the Donbass region, escalating the Russian-backed war against Ukrainian forces there. Russia has distanced itself from allegations of military involvement in the Donbass, though the United States has accused it of being behind the unrest and war there, and videos of Russian soldiers captured in Ukraine, comments by separatist leaders and statements such as that of the head of the Russian Union of Committees of Soldiers' Mothers, Valentina Melnikova have established that Russian service personnel are fighting in Ukraine.

Information about economic impact of Russian invasion of Eastern Ukraine you can find on our page Economy of Ukraine.

Fast fact: The pro-Russian separatists, known for their dislike of all things American and European, have the flag of the unrecognized Novorossia confederation (DPR and LPR) which is strong identical to the banner of the Army of Northern Virginia (the Confederate flag), but it lacks stars.