Fast fact: Ukraine contains around 5% of the worlds mineral resources.

Ukraine’s total reserves of iron ore are estimated at 27.4 billion tones (A+B+C1 category) and composed of rich (1.9 billion tones), as well as of poor ferriferous quartzes (24.1) and brown iron ores (1.4). 60 of the 83 iron ore deposits included in the estimate, are in the Kryvyi Rig basin, whose reserves equal 18.7 billion tonnes.

Ukraine has some of the world's largest manganese deposits, located in south central Ukraine at Nikopol' (Nykopil). Manganese ore types include carbonate, oxide – carbonate and oxide ores. Total manganese reserves in Ukraine are 3.5 billion tons including 2.3 billion tons of commercial reserves. Ukraine’s share in global manganese production is 32 per cent.

Titanium ores have been explored in the area of the Ukrainian crystalline shield. One of the major deposits is the Irshansk deposit (Zhytomyr oblast). Operating there is a concentrator for ilmenite dressing. A titanium ore deposit in Dnipropetrovsk oblast (the Samotkan river basin) with virtually unlimited reserves, is of the most practical importance. Titanium is known to be used in building rockets, submarines, making artificial rubies, sapphires, synthetic rubber, etc.

There are oil and gas deposits but their reserves are not significant (the reserves of these fossil fuels were partly depleted during the Soviet period).

In 2013 the government of Ukraine inked a sharing agreement on shale gas produced at Yuzivska and Oleska with the Dutch Shell and the US Chevron. Ukraine expects commercial shale gas extraction in 2017. By 2030 a production of 6-11 bcm of shale gas a year is wanted by the Ukrainian Government plans.

Ukraine has large reserves of such raw materials as potassium and magnesium salts, table salt, native zeolites, etc. Potassium salt is deposited in Lviv oblast and in Ivano-Frankivsk oblast (Precarpathian). Occurring here are mostly sulfate, mixed, sulfate chloride and chlorous salts. Sulfate salts (К2О content is 8-10 %) are the basic raw material to produce chlorine-free potash fertilizer which is in great demand. Ukraine has large and unique deposits of table salt. As to its chemical purity, this salt is the best in the World.

In Ukraine has deposits of ores of rare metals - zirconium, hafnium, niobium, lithium, beryllium, scandium, tantalum, yttrium, lanthanum, molybdenum, strontium. These metals and their alloys are used in nuclear engineering, electrical engineering, electronics, aerospace engineering. By reserves of some deposits belong to large and even giant. Currently in Ukraine producing large amounts of zirconium and germanium, a smaller - scandium and hafnium.

Ukrainian amber is coming from Northwest Ukraine, mostly from the region of Rivne / Rovno. Ukrainian Succinit from Rivne is of the same origin as Baltic amber. These stones are approximately 40 – 54 million years old and therefore are from the Eocene age. Several insects found in Ukrainian amber are unique and could not be found on any other place in the World.

The multi-branch chemical sector of Ukraine includes chemical, petrochemical and chemical-pharmaceutic sub-sectors with over 1,600 enterprises and structural units. The sector accounts for nearly 10% of industrial fixed assets and over 5% of all those employed by Ukrainian industrial sector.

The structure of the chemical sector includes two groups of enterprises – chemical and petrochemical ones. Within the structure of the industry, predominant are asset- and energy-intensive basic chemistry enterprises. This sector is represented by production of mineral fertilizers, non-organic acids and soda. Nitric fertilizers are manufactured in Donbass (Severodonetsk, Gorlovka) and Pridneprovie (Dneprodzerzhinsk). Rovno and Cherkassy enterprises use natural gas in their production. Phosphate fertilizers are manufactured in sugar-beet producing areas (Sumy, Vinnitsa) and in Odessa and Kostyantynov (Donetsk oblast). Production of sulfuric acid is concentrated in the regions where it is consumed and in the centers of phosphate fertilizers production. Basic chemistry is concentrated in the Crimea and comprises production of bromine, magnesium and iodine. 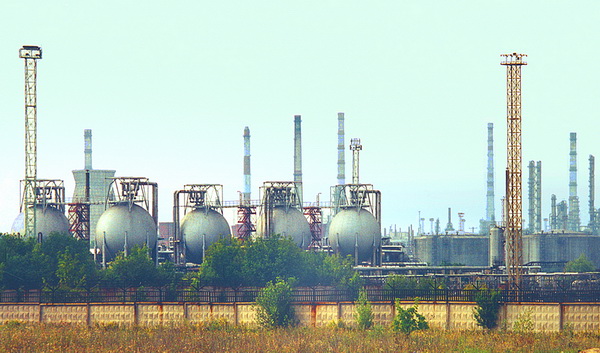 Ukraine’s iron and steel industries are very important segments of the economy. Its importance is due to the fact that the machine building and metal-working industries depend on the production of ferrous and non-ferrous metals, and that metal is the main source of engineering materials and an important export article.

Light industry and consumer goods sectors of Ukraine are underdeveloped in comparison to its heavy industry and agriculture.

Food industry is traditionally the major supplier of basic foods, such as sugar, salt, oil, alcohol, confectionery, etc. Ukrainian food industry is the leader of the agro-industrial complex. It will remain strategically important in future, determining the well-being of the people. The sector has considerable production, research and labor potential. Among the major sub-sectors of the food industry are meat and dairy processing, sugar refining, flour milling and cereals production, oil extraction and starch and molasses production. The most significant centers of the food processing sector are Kiev, Kharkov, Odessa, Nikolaev, Donetsk, Zaporozhye, and Lvov.

The energy sector is of key importance for the national economic development, as both production and municipal facilities require electric power for their operation. The energy sector peculiarity is that the technological equipment and primary generators of electric energy are separated from consumers. As a result, power generation, transmission and distribution have become separate industries.

Ukraine ranks seventh in the world and fifth in Europe in terms of the number of nuclear reactors operated, total capacity and electricity produced. It has 15 reactors generating about half of its electricity.

Overall, Ukraine has a well-developed and diverse transportation system. Ukrainian railroad network is extensive and links Ukrainian cities with industrial enterprises. Waterways such as Dnieper River and Black Sea and Azov sea, and their port cities (Feodosiya, Illichivsk, Mariupol, Nikolaev, Odessa, Yushny, and Sevastopol), play an important role in shipping.

Ukrainian highway system comprises about 147,000 kilometers (91,000 miles) of paved roads. Ukrainian subway systems exist in Kiev, Dnepropetrovsk and Kharkov. Buses small and large whisk passengers along all major city streets in all possible directions. The deepest in the world subway (metro) station is located in the Ukrainian capital, Kiev. It is Arsenal’na metro station (red line) and its depth is 105 meters.

Street trams and trolleybuses — the cheapest forms of transportation — plug slowly along their routes. 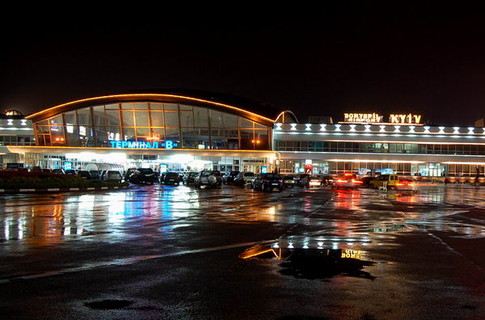 There are major international airports near Kiev (at Borispol), Donetsk, Kharkov, Lvov and Odessa cities.

Historically, Ukraine is well known for its agricultural production. Ukraine has 60.300 hectares of land. Of this, 70% is agricultural land, 17% is used for forestry, the rest is for housing, industrial and other purposes (used as state reserves, for recreation etc). Ukraine’s agricultural sector employs 23.1 percent of the work force.

Ukraine's farms produce large amounts of potatoes and grains such as wheat, corn (maize), and barley. Potatoes, a food staple, are also grown for making starch and alcohol. Ukraine is one of the world's leading producers of sugar beets. Sunflowers are cultivated for their seed oil and latex. Other major crops include tomatoes, cabbages, squash, apples, and sour cherries. Beekeeping, silkworm raising, and fish farming also contribute to the country's economy. Large numbers of cattle are raised for meat and milk. Other livestock include poultry, pigs, sheep, and goats.

Fast fact about agriculture of Ukraine: With its rich black soil and generous supplies of grain, Ukraine was once known as the “breadbasket of Europe”.

One of the most frequently mentioned theories of the causes for Ukraine crisis is a struggle for redistribution of power in energy market, in particular the European one. Proponents of this theory argue that the United States has in their view "flooding" the European market with US shale gas, thus diminishing Russia's clout. Ukraine can help the US in doing so since it has significant reserves of shale gas. Some go as far as recommending placing the map with arrangement of military hostilities in Ukraine over the map outlining deposits of the so-called unconventional gas.

The economic blockade of pro-Russian separatists controlled regions comes on top of enormous infrastructure damage as a result of the conflict with Ukraine. Ukrainian Minister of Finance announced in October 2014 that reconstruction of those parts of the Donbass currently under Ukraine's control would cost approximately $2 billion.

Most of the territories' industrial enterprises have shut down, including the Luhansk Machine-building Works, the Stirol fertilizer works, at least seven steelworks, the German-owned Heidelberg Cement works, etc. Out of the region's approximately 140 coal mines, 93 are on separatist-controlled territory, 69 of which have suspended operations. Over half of the labor force in the DPR and LPR has neither employment nor any other source of income. 40,000 small businesses have declared bankruptcy. Food production has fallen by 25-30 percent. Thousands of kilometers of roads, thirty bridges, and 4585 apartment buildings have been destroyed. Fifty-eight thermoelectric power stations have been damaged. Forty-seven villages have been cut off from all electric power sources.

Annexation of Crimea by Russia

The annexation caused by a military intervention of Russia into the Autonomous Republic of Crimea and the city of Sevastopol, both administrative divisions of Ukraine.

The main direct economic consequence of the Crimea annexation is the loss of the Black Sea gas fields and a possible deterioration in the country’s energy sector.

In July, 2014, Ministry of Energy and Coal Industry estimates losses of Ukrainian energy sector as a result of the annexation of Crimea by Russia as USD 300 billion.

The direct economic losses will arise from the nationalization of Ukrainian enterprises located in Crimea. "Chornomornaftogas", "Ukrtransgas", a series of powerful chemical industry enterprises, ports and more than 130 resorts can be nationalized.

For most private companies, nationalization is quite a remote risk. Ukrainian owners of the Crimean assets can face the problem of re-registration. After the annexation of Crimea all private property, including land, real estate, and companies must be re-registered in accordance with Russian legislation. The need for reissuing of shareholders' registers will result in a sharp increase of transaction costs for medium and large businesses. Loss of Crimean seaports can lead to short-term losses for their major customers – grain exporters. A transport blockade of the peninsula will lead to cargo traffic leaving from the Crimean ports to terminals in Mykolaiv, Kherson and Azov ports.

Some of the economic chaos in Ukraine has spilled over to Russia and other European economies. But, not surprisingly, those citizens do not have it nearly as bad as Ukrainians. The World Bank estimates that Russia’s economic growth will slow to 0.5 percent this year, nearly 2 percentage points lower than it would have been had Russia not annexed Crimea. On a continental scale, European growth will be reduced by about 1 percentage point because of trade linkages to Russia and Ukraine.

But once the ripples extend to the global economy at large, the Ukrainian conflict is barely perceptible. The report expected global gross domestic product growth to slow by only about one-tenth of a percentage point this year.