Kiev is the Capital of Ukraine

Kyiv is the Capital of Ukraine

Kyiv (Kiev) is one of the more beautiful and one of the oldest cities of Eastern Europe and has played a pivotal role in the development of the East Slavic civilization as well as in the modern Ukrainian nation. Founded 1500 years ago, Kiev is the capital of Ukraine and Kiev region.

The name Kiev is said to derive from the name of Kiy (also Kyi), one of four legendary founders of the city (brothers Kiy, Shchek, Khoryv, and sister Lybid). The legend is widely recognized as a source of Kiev's mythology and, accordingly, urban naming. Kyiv was founded in the latter half of the 5th, or the early 6th century, and in 1982 its 1,500th anniversary was officially celebrated.

Currently, Kiev is the traditional and most commonly used English name for the city, but in 1995 the Ukrainian government adopted Kyiv as the mandatory romanization for use in legislative and official acts.

Kiev is situated on the picturesque banks of the Dnieper river. It is one of the most beautiful cities of Europe. One half of Kyiv's territory is occupied by parks and gardens. One of the biggest cities of Europe, Kiev has a population of 3,14 million and occupies an area of more than 840 square kilometres.

Kiev's most famous historical architecture complexes are the St. Sophia Cathedral, where the princes of Kiev were crowned in the years of Kiev's grandeur, and the Kiev Pechersk Lavra (Monastery of the Caves), has two 11th-century cathedrals on its grounds, in addition to its world-famous catacombs, which are recognized by UNESCO as a World Heritage Site. 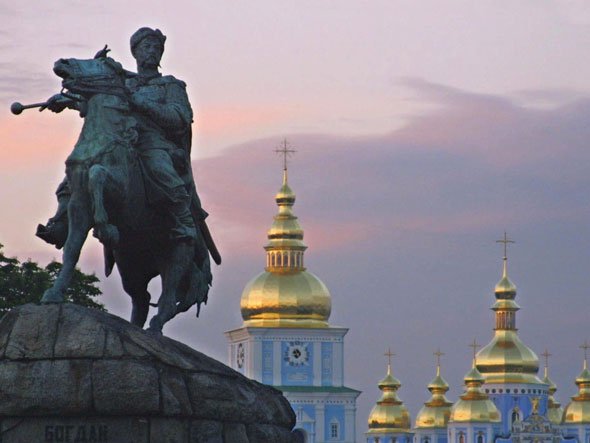 Also of interest are the ruins of the 11th-century Golden Gate, once the main entrance to the city. Kiev is the site of several universities, most notably the University of Kiev (founded in 1834). The Ukrainian Academy of Sciences and its Central Library, Ukraine’s largest library, are located in Kiev. Kiev is a modern city with many monuments, more than 100 museums (including the National Museum of the History of Ukraine (1899), the National Museum of Natural History, the National Art Museum of Ukraine, Pirogovo), 33 theatres (including a Music Conservatory, National Opera of Ukraine), zoo and a large sports stadium.

Being the largest city of Ukraine, Kiev is a leading industrial and commercial center of the country. Kiev's major industries include: food processing (especially processing of beet sugar), metallurgy, manufacture of machinery, machine tools, rolling stock, chemicals, building materials, and textiles. The development of Ukrainian economy gave impulse to business activity of the city. There are a lot of new office centers, banks, trade exhibition centers and other commercial enterprises appearing in the city nowadays.

Kiev is known as the most green city. The area of the green zone covers 43,600 hectares (making up 168 sq.m per one resident), more than half of which is taken up by woods, public gardens, two botanical gardens, parks and tree-lined boulevards. At the United Nations Climate Change Conference 2009 Kiev was the only CIS city to have been inscribed into the TOP30 European Green City Index.

Kiev is served by a good transportation network. Trunk railways and all-weather roads link Kiev to Moscow, Kharkiv and the Donets Basin, southern and western Ukraine, and Poland. Within Kiev city itself there is efficient subway, rail, and bus service. The Dnieper River is navigable about nine months of the year, and Kiev’s Boryspil airport operates flights to other Ukrainian cities and to cities in Europe, Asia, and North America.